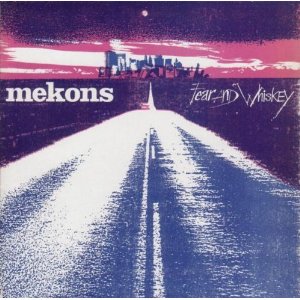 Fairly, or unfairly, “Fear and Whiskey” is often credited as the first alternative country album. Strange for a band of far-left wing Englanders who cut their teeth on the U.K. punk rock scene of the late 70’s. “Fear and Whiskey” was the Mekons fourth full length album release but their first since 1980. The ramshackle band threw punk, folk, reggae, country & rockabilly music into a melting pot resulting in a sound unique unto itself. The Mekons’ playing is loose and raucous and they cry out passionately against all forms of greed- they often coming off as virulently anti-capitalist. Their music is smart, humorous & full of drunken fun. “Fear and Whiskey” may have influenced much of the roots-rock and alt country that came after it but none of those records still sound anything like it.

Buy Hard to Be Human Again – Fear and Whiskey

Buy Hard to Be Human Again 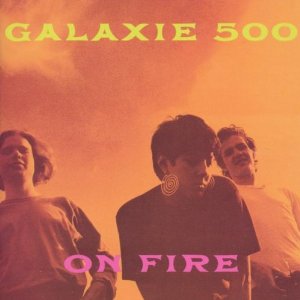 Galaxie 500 was a group of three Harvard University students who were progenitors of both the shoegaze and especially the slowcore movements that developed in the early nineties.   I never heard the band until long after they broke up- they were an extremely underground during the life of the band, only known to musicians, music writer and very hip college students.  But like all great underground bands their stature and influence continues to grow after their demise.  Lead singer Dean Wareham would also form Luna in the nineties which would also increase Galaxie’s notoriety as Luna was a much more commercially successful band. “On Fire” is the band’s second and best album. The band plays as slowly and as beautifully as the Cowboy Junkies but with much more muscle behind them. There are subtle time changes throughout the album but none of the songs ever reach a crescendo. It’s an album to play on a wintry day or night- perfect for both chilling out and crying in your beer. 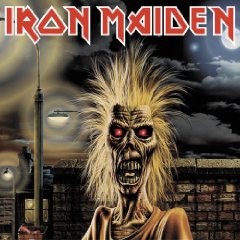 “Iron Maiden” is the debut album from the legendary captains of the ‘New Wave of British Heavy Metal’. If you only know Maiden from its most popular Bruce Dickenson-fronted incarnation, please be advised that Iron Maiden on its first two albums was an entirely different band. Only bassist and founder Steve Harris and guitarist Dave Murray overlap between the two lineups. Though Dickenson is a way more technically proficient vocalist than original singer Paul Di ‘Anno, Di ‘Anno, along with drummer Clive Burr gave the band a much more punk edge than the prog-metal sounding later Maiden. Despite the limited vocal range, the playing on this debut is top notch and fully formed. As so often happens with debut albums, there are loads of great songs here too- Maiden classics like “Running Free”, “Prowler”, “Sanctuary” and “Iron Maiden”, along with amazing ballad “Remember Tomorrow” all appear here. I imagine I’m in the minority but I consider their debut the best thing Maiden ever did- it’s perhaps the best fusion of punk & metal that I’ve ever heard. 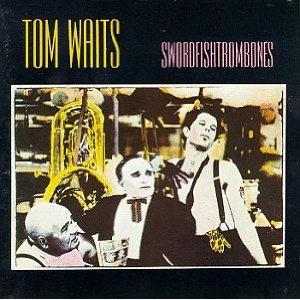 “Swordfishtrombones” began a new phase in L.A. singer-songwriter Tom Waits’s career. Not that his barroom poetry and beat jazz stylings weren’t eccentric before, but “Swordfish” is where he got really weird- almost completely reinventing himself as an artist. He ditched the piano & strings prevalent on many of seventies’ albums for horns, carnival music and various percussion instruments. His low register croon became a growl, similar to Howlin’ Wolf or Captain Beefheart. Beefheart is actually the only artist that I’ve ever heard who could be called a precursor to what Waits was doing in ’83- but musically Waits was even more off kilter. Though this music could never be called accessible it is quite wonderful and unique- he is a singular artist and “Swordfishtrombones” is one of the highlights of his vast catalog. 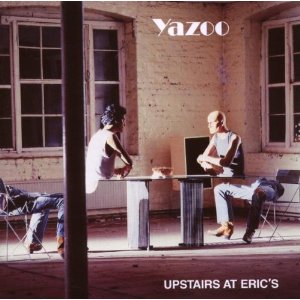 Yaz (known back in their native U.K. as Yazoo) was a synth-pop duo made up of former Depeche Mode and future Erasure member Vince Clarke and future solo artist Alison Moyet. They only recorded two albums as a group together and “Upstairs at Erics” is their first and best. At the time only Yaz, early Depeche & the Human League were playing this type of music and its relative commercial success paved the way for the whole larger movement to come. Vince Clarke’s keyboard lines were simple and spare but very danceable and Moyet has a wonderful, husky voice that drips with emotion and yearning. Contains dance floor classics “Don’t Go” and “Situation” as well as heartbreakingly beautiful ballad “Only You”. 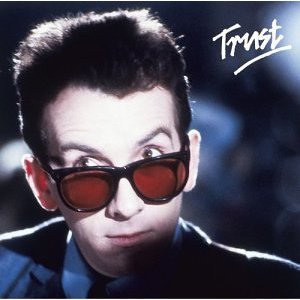 Costello is certainly someone you could call a jack of all trades. Throughout his career he has experimented with practically every genre you can think of save Rap & extreme Metal. He uses many of his albums to concentrate on one genre in particular i.e. country music on “Almost Blue”, soul on “Get Happy” and baroque pop on “Imperial Bedroom”. “Trust” his fifth full length album, is the most diverse of his entire career. He runs the gamut of genres within this one album touching on soul, country, punk, new wave, old school crooner pop and even jazz. It comes off as a much more sophisticated album than his previous releases and was a perfect transition into a new decade. Several Costello classics appear on “Trust” like “Clubland”, “Watch Your Step” and “New Lace Sleeves”, but the album is a very worthwhile listen from start to finish. 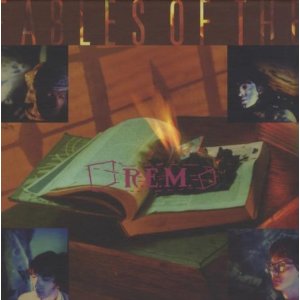 R.E.M.’s “difficult” third album is a dark & ominous record filled with ruminations on the mythology of the old American south.  After two straight masterpieces, “Fables” was a bit less consistent than their previous offerings, but contains R.E.M. classics like “Driver 8”, “Feeling Gravity’s Pull”, and “Can’t Get There from Here”- the one song that does not carry the moody tone of the rest of the album.  Though it isn’t one of my favorite of their 80’s albums, it is still essential and acts as a bridge between R.E.M.’s folkie jangle pop beginnings of “Murmur”, “Reckoning” and the “Chronic Town” EP and the fuller, more commercial sound they would develop later in the decade.

Buy Driver 8 – Fables of the Reconstruction

Buy Maps And Legends – Fables of the Reconstruction 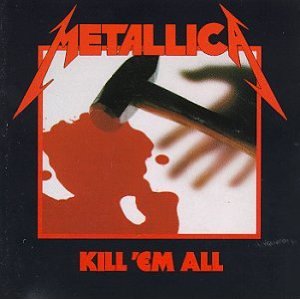 Year one for Thrash Metal. “Kill ‘Em All” flat-out invented this sub-genre. Normally there is a who/which came first in any birth of a genre argument but I’ve never heard anyone convincingly argue that there was another thrash album that came before this “Kill Em All”. Metallica combined the intricate twin guitar riffing of the best of the New Wave of British Heavy Metal bands (Priest, Diamond Head and especially early Maiden) with the energy and velocity of punk rock- like Motorhead before them. But Motorhead was punk rock with a Metal attitude and without the same amount of musicianship, intricacy and lengthy songs. Compared to their subsequent albums, the lyrics and subject matter on “Kill ‘Em All” comes off as pretty sophomoric- most every track deals with conquering the world (in no specific way), touring, or tributes to ‘Heavy Metal’ in general. But they were just kids and would further hone their craft on later albums and the time changes all over the record are vintage Metallica and the playing is breathtaking and relentless. As a side note- co-founder Dave Mustaine (of Megadeth) helped write 4 of the tracks on the album before he was booted from the band. 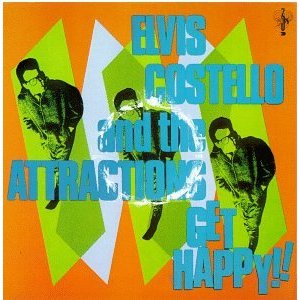 Elvis’s 4th album is his tribute to Soul music, and his attempt to make up for the very unfortunate comments he made in 1979 in a drunken stupor at a bar to some members of Stephen Stills’ band in which he called Ray Charles “a blind, ignorant ni**er”, apparently because the band members were prodding him and he wanted to be left alone. Elvis, a huge fan and student of all forms of African-American music, still hasn’t fully lived those comments down all these years later. “Get Happy” is a 20 track album which covers many different forms of Soul music- Motown, Northern Soul, deep-southern Soul, and urban Soul ballads. Most of the tracks hover around the 2 minute mark, some under 2 minutes and none over 3 ½ minutes. It plays as a party album. No one would mistake Costello’s music for Disco but this is his most danceable album. Though there is some minor filler, the songs are so short that it doesn’t hinder the flow of the album and there are a ton of Costello classics to keep your ears happy- “New Amsterdam”, “High Fidelity”, “Can’t Stand Up for Falling Down”, “The Imposter” and “Riot Act” to name a few.

Buy I Can’t Stand Up for Falling Down – Get Happy!!

Buy I Can’t Stand Up For Falling Down 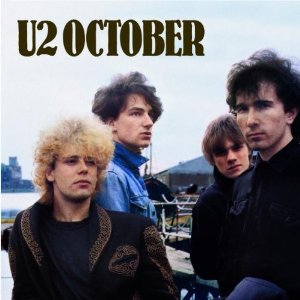 “October” is the 2nd full length album and by far the least heralded album of the U2’s eighties output. While “October” is minor compared to albums like “The Joshua Tree”, “War” and “The Unforgettable Fire”, it does contain it’s share of U2 standout tracks like live staple and leadoff track “Gloria”, the defiant “I Threw A Brick Through A Window”, and the beautiful and melancholy title track- one of my very favorite U2 songs. There are too many mediocre tracks for “October” to measure up to U2’s classic albums but those three tracks plus others like “Rejoice” and “I Fall Down” allow the album to stand on its own worth- not a misstep but a minor work between their amazing debut “Boy” and their commercial breakthrough “War” two years later.  Hard to believe that this legendary band from Ireland was ever a hungry bunch of upstarts- they were operating on such a high level at the start of their career that even their most minor album deserves a place on this all decade list.