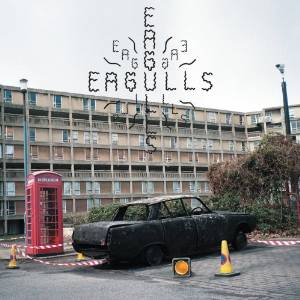 Self-titled debut from this brash four piece from Leeds, England is another group not receiving enough critical or commercial hosannas in my book. “Eagulls” is loud, post-punk with tons of reverb. This music is nothing you haven’t heard before, but the snotty attitude, hooks for days and shout-along choruses make it on of the year’s most fun albums. The big standout is “Possessed” one of my favorite cuts of the year but there are a handful of other great earworms like “Soulless Youth”, “Never Endings” and “Hollow Visions”. Sometimes kick-ass rock music is what you need and Eagulls bring it. 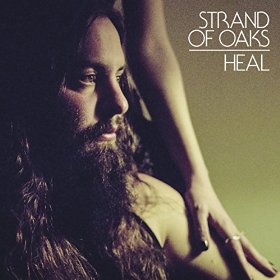 Strand Of Oaks is another “group” that was not even on my radar before last spring. Strand Of Oaks is in effect Timothy Showalter, a self-loathing singer songwriter from the Midwest. “Heal” is only his third album and it is a damn good one. Having the same mentality as indie mope-rockers with an alt country bent like Sun Kil Moon and Songs: Ohia, but delivered with more bit like a new millennial Crazy Horse. “Heal” ‘s lyrics describe Showalter’s teenage angst and personal darkness and he goes into vivid detail. Because he is so tough on himself, you believe that he is ultimately a good man or is really trying hard to be and this raw music comes off like an exorcism. The music on the album nods not only to alt country, but to heavy metal, post punk & even synth-pop. Regardless of what sound Showalter is exploring it usually comes off as heavy. Any fan of “real rock” should really enjoy listening to this but the introspective lyrics reveal a greater depth than a normal rock band. And that shoule keep them coming back. 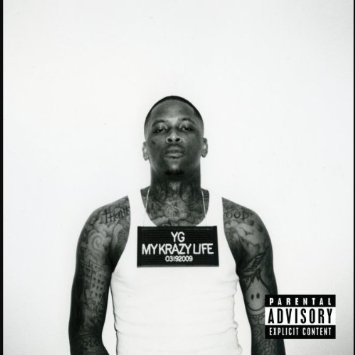 In a year where Kendrick Lamar was mostly silent, newish rapper YG carried the rap torch for Los Angeles. L.A.’s hottest producer DJ Mustard is behind the boards here and helps elevate both “My Krazy Life” and YG with his state of the art mix of 90’s house beats mixed with “Chronic”-era G Funk. The often almost danceable beats is a nice contrast to the gangsta rap lyrics that alternate between violent scenarios, explicit sex and partying much like Dre & Snoop did 20 years ago. And YG has a real feel for good storytelling. Like any good writer it separates his music from the standard gangsta rap template even as his album adheres to it. Many will be turned off by the typical violence and misogyny but the awesome production and handful of bangers- including big crossover hits “My N**ga” (“My Hitta” on the radio) and “Who Do You Love? (Feat. Drake)”. And YG spends the end of his album apologizing to his mother for his various exploits. Oh yea and Kendrick shows up to guest rap on “Really Be (Smokin N Drinkin)” one of the other best tracks on the album. “My Krazy Life” is one of the best rap albums of the year.

Buy Who Do You Love? [feat. Drake] [Explicit]

27. OUGHT- MORE THAN ANY OTHER DAY 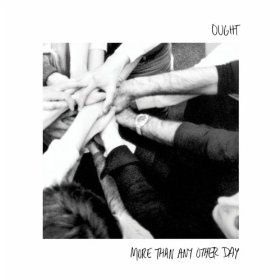 Debut album from Montreal punk band- made up of all ex-pats from the U.S. who met at university in Canada. Ought’s sound encompasses many variants and eras of punk & post-punk. They have a nervous, restless, jittery energy like Television, the Talking Heads or the Feelies but their frenetic jangle pop can also move quickly into the feedback, noise experiments of a Fugazi or a Sonic Youth. Though artsy and lo-fi their anger shows though- righteous more than ironic or sarcastic. Their temperature sounds like it’s coming to a boil. Despite all of their fairly obvious influences they don’t come off as mere copycats.

Buy More Than Any Other Day

Buy Today More Than Any Other Day 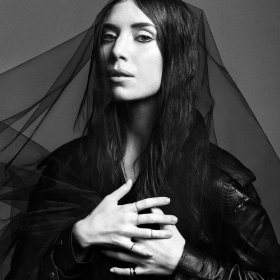 “I Never Learn” competes with Sharon Van Etten’s “Are We There” as the saddest album of the year. It’s Li’s third full-length album, recorded after a bad break-up took the native Swede halfway around the world to her current home in Los Angeles. The barely over thirty minute record takes the listener through the trajectory of her relationship and break-up. Unlike her previous albums there is no obvious attempt at making a single here- all songs stay true to the overall narrative. That being said there is nothing too experimental or inaccessible here- these are bare, stark, authentically rendered torch songs. You can feel her sadness and pain in every note she sings. “I Never Learn” is perhaps the best album from a pretty underrated artist.

Buy No Rest For The Wicked 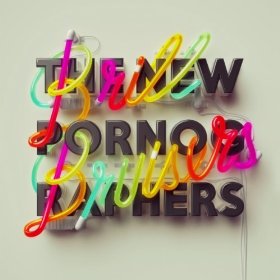 “Brill Bruisers” is the sixth full length album from the definitive supergroup of our not so new millennium and it’s the groups best since their 2005 classic “Twin Cinema”. The New Pornographers have never made a bad record but this one is a big step up from their last two. They are both more energetic and the songwriting is tighter and more on point. Each writer in the band delivers at least one great track. The title track is an instant NP classic. The choicely named “Champions Of Red Wine” is another standout. Dan Bejar (of Destroyer) delivers perhaps his most accessible cut as a New Pornographer in “War On The East Coast”. Second single “Dancehall Domine” and epic closer “You Tell Me Where” are two others great cuts. The joy in listening to Neko Case and A.C. Newman’s vocal interplay is why we love music. In 2014 no one is making better pure power pop than the New Pornographers.

Buy War On the East Coast 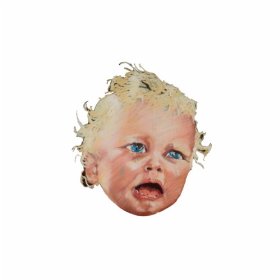 Swans are an experimental No-Wave rock band led by singer/songwriter & multi instrumentalist Michael Gira, whose first stint lasted roughly from 1982 to 1997. I have a series of EP’s he made on the mid 80’s and they are anything but a pleasant listening experience. They are one step up from Lou Reed’s “Metal Machine Music” in atonality. The music is slow, droning and painful. Gira, now in his late 50’s, reformed Swans in 2010. 2012 “The Seer” was one of that year’s most critically acclaimed records, so much so that I purchased a copy despite my unpleasant experience with their earlier model. Though I enjoyed it I didn’t go back to it very often. So it was with much surprise that I find myself enjoying their latest “To Be Kind” so much. Is it a more accessible album or did I finally catch up to Swans? The group is still one of the heaviest going and I’m finding grooves in the places where it was just plodding monotonous droning before. It’s another double album- almost two hours long with a thirty- four minute track right in the middle, but the music is just as grotesque and gargantuan but with much more nuance and variety than their earlier stuff. It is still bleak and not for the faint of heart but if you allow yourself you can lose yourself in its darkness.

Buy To Be Kind [Explicit]

Buy A Little God In My Hands

“Too Bright” isPerfume Genius’s (AKA Mike Hadreas) most outward looking, uncompromising and in-your-face to date. His previous two albums dealt much more with his own personal issues- very heavy stuff lyrically but quiet musically and very internally focused. Hadreas rocks out more on “Too Bright” adding fuzz guitar to the proceedings. For a usually soft I intense artist like Hadreas, these heavier moments hit like a sledgehammer. Tracks like “Grid”, “Fool” and “Longpig” are all standouts but the real moment of brilliance is “Queen”, one of the best tracks I’ve heard all year. It’s the perfect gay rights anthem for these times where Hadreas correctly senses the momentum toward acceptance and defiantly stares back at the rest who are being left behind with their archaic, fearful views and sings mockingly “No family is safe when I sashay.” Bold, perfect and spine-tingling. 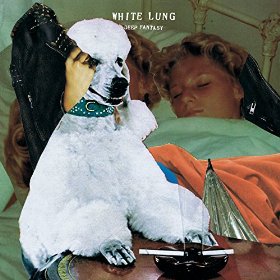 Though I had previously heard one of their songs in 2013, White Lung was one of my favorite new discoveries this year. They are a four piece, unapologetically feminist, Vancouver punk band, made of of ¾ females including outspoken singer and face of the band Mish Way. “Deep Fantasy” contains less ballads than an early Ramones album- all angry, fast punk over and done with in 22 minutes. They sounds like a mix between Hole, 90’s Riotgrrrl & early 80’s hardcore. Though very listenable and hooky it’s not nearly clean enough sounding for radio. Way takes on issues in a straight-on non subtle way like domestic violence, misogyny, the patriarchy, eating disorders & rape. The lyrics and music are sharp, incisive and incendiary. Choice cuts include “Down With The Monster”, “Face Down”, “I Believe You” & “Down It Goes”. Righteous stuff.

Buy Down It Goes

Buy I Believe You 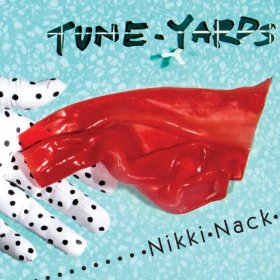 I guess no longer being an underdog has unfortunately made Merril Gaubus’s Tune-Yards a bit of an after thought. After her second album “Who Kill” very surprisingly placed #1 on the very influential 2011 Village Voice Pazz & Jop poll the stakes were raised for this strange, experimental band. And though “Nikki Nack” was hardly slagged in the press this year it was rarely found on top ten lists either. Judging from the high quality of the music on “Nikki Nack” this seems to be too much of an overcorrection (even though I only have it #20). Tune-Yards once again combines post-punk, funk, musical theater and African rhythms to produce one of the most eclectic and unique sounds this decade. I anything “Nikki NAck” is a bit more slowed down and more accessible than “Who Kill”, which makes it less in-your-face surprising. Though hardly fit for modern radio consumption, the music can be very hooky in all of its oddity. Tracks “Wait A Minute” and “Water Fountain” are two of their best yet and “Nikki Nack” has far more hits than misses.

Buy Wait for a Minute