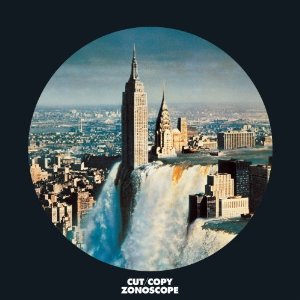 “Zonoscope” is the 3rd full length release by the Australian indie-electronic dance rock band Cut Copy.  Their 2008 album “In Ghost Colours” was their breakout and one of my favorite albums of 2008.  “Zonoscope” is clubbier, more expansive and less singles oriented than its predecessor.  If the songs are not quite as tight as before, Cut Copy still knows their way around a hook and many  tracks on “Zonoscope” are standouts including “Need You Now”, “Hanging Onto Every Heartbeat”, “Where I’m Going” & “Take Me Over”.  “Zonoscope” proves that their last album was no fluke and Cut Copy sounds like New Order or Depeche Mode for a new generation, if not quite as dark as either of those groups. 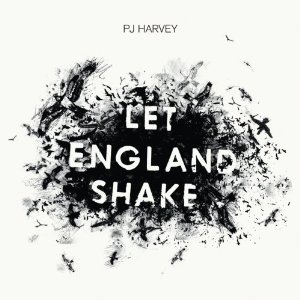 PJ Harvey’s now officially been at it for two decades and she continues to make challenging music, never repeating herself, like only a true artist can.  “Let England Shake” is her eight album and easily her best since 2000’s “Stories from the City, Stories from the Sea”.  Surprisingly to me it has absolutely dominated the 2011 year end critic’s lists, particularly in her native U.K., finishing first by over 100 points (at least by my tallies).  Though more song oriented than her last few albums, it’s not like these songs are made for radio, but they have obviously struck quite a nerve in a time when many in the U.K. are questioning the status quo & the nature of empire.  Harvey has never been this political, focusing her attention on England, war and various injustices.  She uses the same high vocal pitch that she did on her previous album “White Chalk” and the music is mostly soft and quiet though much catchier than on the stark and barebones “Chalk”.  The title cut, “The Words that Maketh Murder” & “Written on the Forehead” are all among the best songs of the year.

Buy The Words That Maketh Murder 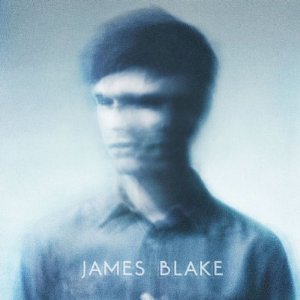 Next to tUnE-yArDs, James Blake’s debut album may be the most unique release of the year.  After releasing a series of instrumental EP’s on 2009 and 2010 that set the blog world on fire, Blake moved to adding vocals on his first full length.  Blake has a startlingly soulful voice though he often electronically manipulates his voice like Thom Yorke in latter day Radiohead releases.  Only about half of the album is really song oriented & I still have a hard time wrapping my head around Blake’s most experimental work, but there are enough absolute standouts on “James Blake” to push the album into top twenty territory.  Blake’s cover of Feist’s “Limit To Your Love” and “The Wilhelm Scream” are two complete jaw droppers.  Blake’s music may be soft and quiet, but it’s also deeply beautiful and quite intense.  I’ve never heard anything like it.  And he is only 22 years old.

Buy Limit To Your Love 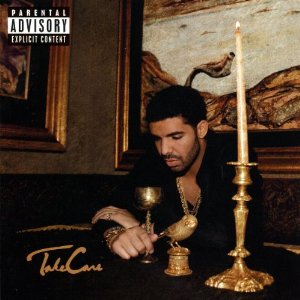 After just an EP released in 2009 and an album released last year, Toronto’s Drake became one of the biggest stars in the rap game.  His second album “Take Care” is an 80 minute long, epic blockbuster.  Though I am normally against albums this long, particularly rap albums, I have to say that grows on me rather than wears on me the more I listen to it.  Drake has been so prolific this year that he released a great standalone single called “Dreams Money Can’t Buy”, was heavily featured on the rap anthem of last summer “I’m On One” and has made numerous other guest appearances on tracks by Nicki Minaj, Lil Wayne & the Weeknd among others.  “Headlines”, “Make Me Proud, “Lord Knows” & “The Ride” are all fantastic jams and even if the rest of the album were trash, they would make it a worthwhile purchase, but there are really very few duds.  “Take Care” lags a little bit in the final third of the album but then it gathers steam again at the very end.  Drake, of mixed race who actually got his start in showbiz in the show Degrassi High, is a new kind of rapper, one who follows in Kanye West’s footsteps.  He may not have the most amazing flow, though he has certainly gotten better, but he is self-aware, rapping intelligently about his feelings and unconcerned with posing as street or as a drug dealer.  He grew up upper-middle class and is now filthy rich. But he doesn’t seem necessarily happy about it.  Like West he is unafraid to expose his own hypocrisies- anything to help him find the meaning of life. 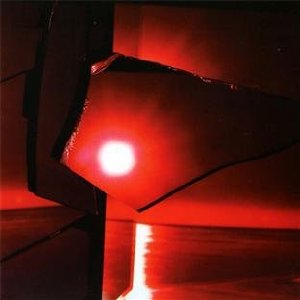 Why is TV On the Radio no longer getting any love?  Their fourth proper album “Nine Types of Light” was released last spring to considerable fanfare, but seemed to disappear soon thereafter.  While not as in your face as their last couple albums, I hardly see their latest release as a misstep.  It’s a continuation of the mellower sound that TVOTR developed on their last album “Dear Science”.  The band may be more focused on love now than anger and politics. “Nine Types” may just be the band’s most beautiful album to date but it can also be funky as hell at times and tracks like “Caffeinated Consciousness” and “No Future Shock” show that TVOTR can still rock out with the best of ’em.  In the future, when TVOTR’s entire discography is studied, this album is way too good to just be a blip on the radar screen.  If you are already a fan of this band you should love “Nine Types of Light”.  If you’re not it’s never too late to start.

Buy Will Do – Nine Types of Light 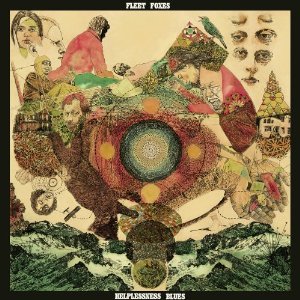 Fleet Foxes self-titled debut was my favorite album of 2008.  Their follow-up album, “Helplessness Blues” doesn’t quite reach those heights for me.  There aren’t as many ear worms here and many of the songs take a number of listens to truly settle in.  The Foxes gorgeous harmonies are back (every band member can sing!  Well!), and the band adds jazz & avant garde passages to the folky music to create a weirder, more experimental vibe than they ever had previously. There are instruments I’ve never even heard of in the song credits- what is a marxophone?  A harmonium? For anyone who loves folk-rock acts like the Byrds, Simon & Garfunkel & Crosby, Stills & Nash, Fleet Foxes are well worth a listen, but Fleet Foxes does have their own distinctive sound. In no small part to lead singer Robin Pecknold, who is one of the best and most beautiful singers in modern music.  Fleet Foxes may remind you of yesterday’s music but they are no carbon copy.  Their one of the best bands going today.

Buy The Shrine / An Argument 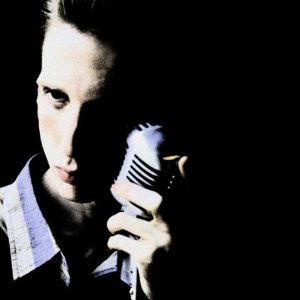 Atlas Sound is thought of as lead singer Bradford Cox’s side project off of his main group Deerhunter, who released my 2nd favorite album of 2010.  But Atlas Sound is becoming increasingly relevant and should not be relegated to also-ran status.  Though both groups are on the more experimental side of indie-rock, Deerhunter veers a bit more to the rock side, while Atlas Sound is hazier, mellower and more stoned.  “Parallax” is a true headphones album.  When I listened to it the first few times at work it didn’t make much of an impression, but when I paid close attention and drowned out the rest of the world the beauty and nuances in the music came out. Nearly every song on “Parallax” is good.  Several like “The Shakes”, “Mona Lisa” and “Angel is Broken” are as pop as anything Cox has done before.  Those are all good songs but I like the slow, sad stuff the best here- “Modern Aquatic Nightsongs” and “Terra Incognita” are two of their best songs yet.  I liked Atlas Sound’s last album just fine, but I’m really surprised I like “Parallax” as much as I do.  It really snuck up on me.  Give it some time and maybe it will do the same for you. 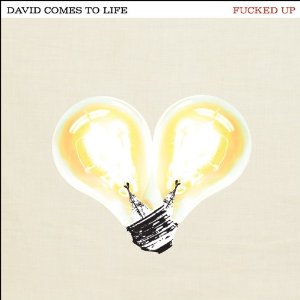 A nearly 80 minute hardcore rock opera from a Canadian band called Fucked Up?  I thought I’d heard it all.  And apparently “David Comes to Life” might be the punk/prog/metal outfit’s last full length release so hear them while you can.  This band is certainly not for everyone.  Gargantuan singer Pink Eyes comes off as a hybrid between the cookie monster and the dude from the Mighty Mighty Bosstones, and his guttural roar can overpower the music when you’re first listening to the band.  But if you have a high tolerance for punk or metal and can stick around long enough to give the album a few listens the rewards are abundant.  There are crazy good guitar riffs everywhere, and plenty of hooks to be found amongst the screaming.  The concept is about a blue collar working stiff who meets and falls in love with a revolutionary only to see her later die in a terrorist bombing.  The plot is obviously way thicker than that and it gets more fun to unravel it with each listen. 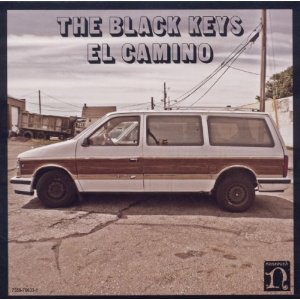 I don’t think anyone thought that the Black Keys would turn into rock stars when they first emerged on the retro garage rock scene in the early oughts along with other bands like the White Stripes, the Hives & the Kills.  But years later here we are.   The Keys just released their seventh album “El Camino”, in December, it sold hundreds of thousands out of the gate, the band appeared for the 2nd time on Saturday Night Live and have a huge radio hit with the “Lonely Boy” single.  I have enjoyed all of the Keys’ albums, some more than others, but “El Camino” may just be their most satisfying.  2010’s “Brothers”, which was their breakout album, had great moments, but was too long and laden with filler.  “El Camino” is over in 38 minutes and doesn’t have one misstep.  “Gold On the Ceiling”, “Money Maker” and “Little Submarines” are particularly great.  Super producer Danger Mouse is back at the helm.  He had previously produced 2008’s “Attack and Release”, an interesting if disjointed album.  With “El Camino” he really nails it by streamlining the experimental flourishes and keeping his eyes on the prize- keeping the Black Keys sounding like the meat & potatoes blues-rock band that they are, but delivering with them their most pleasing set of songs yet. 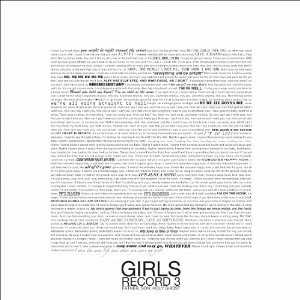 Girls 2nd album “Father, Son & the Holy Ghost” is one of the best reviewed indie-rock records of the year.  Like Fleet Foxes I dig it a ton but it falls short of their debut for me.  “The Album” made my top 40 of the whole decade (from 2000-2009) so their follow-up had a lot to live up to.  The essence of what made the band great is still here- singer Chris Owens heartbreaking Buddy Holly meets Elvis Costello hiccup of a voice that always bleeds pure emotion.  The band’s loose playing and mishmash of styles and their ability to perform a long, drawn out ballad one minute and rock out hard the next.  “Father, Son” is a longer, more well-produced and experimentally bolder album than either their debut or the follow-up EP from 2010.  Girls add monster guitar solos, flamenco guitar and even a “Dark Side of the Moon”- esque gospel chorus on the most epic track here “Vomit”.  They aren’t afraid to explore soft rock, psychedelic music & full on heavy metal ala “Die”.  It’s a lot to take in all at once and I’ve found that some of these tracks sound better as individual songs than as part of the album.  But there is a lot of great stuff here and along with Girls very good EP, the San Francisco band is now batting three for three.