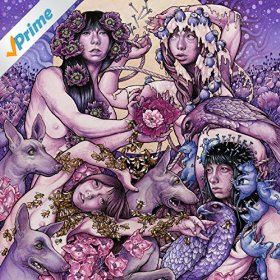 Coming right before Christmas, Baroness delivered the last great album of 2015. Straight forward metal, like a less progressive Mastodon, Baroness are the perfect band for metalheads who appreciate expert musicianship and pummeling riffs but are tired of the cookie-cutter sludge heard on “alternative” radio and have no time for over the top, unintelligible inauthentic screaming vocals. “Purple” is the long awaited follow-up the Baroness’s seventy five minute 2012 double album “Yellow & Green”. “Purple” is a much shorter, barely forty minute album with zero missteps. Its subject matter concerns the near death experience and long physical recovery of the band members due to a bus crash shortly after the release of “Yellow & Green”. Though a true metal album, Baroness often add synths and go into quieter atmospherics throughout the album, making their pummeling drums, heavy guitar riffs and catchy shout-along choruses even more affective when they hit you. Apart from a pretty good album ending ballad and an instrumental which acts as a bridge between the first and second sides of “Purple”, every track is outstanding. “The Iron Bell” and “Try To Disappear are my current favorites. 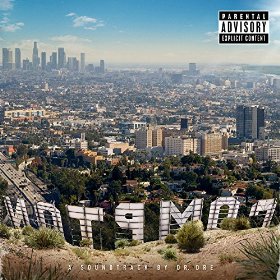 Legendary rapper/producer Dr. Dre finally shelved the long awaited album “Detox” and rush released this companion album to the wildly successful film “Straight Outta Compton”, and the album is somewhat surprisingly a resounding success. Dre became a victim of his own perfectionism with “Detox”, but was able to use the focus on one particular subject to his advantage- his hometown. Dre brings in his most famous collaborators to guest on “Compton”- Snoop, Ice Cube, The Game, Eminem, along with Compton’s finest current rapper Kendrick Lamar, who is present on several of “Compton”‘s highlights. Expert producers like DJ Premier and DJ Dahi also contribute exhibiting both Dre’s clout as reigning godfather of the rap industry as well as his impeccable A&R skills. Dre sounds different than you’ll remember him on “The Chronic” or even “2001”, but his voice is hardly the spotlight anyway. His production is hot shit and the beats on the album are both current and varied. Highlights of the album are “Genocide” and “Deep Water” but nearly every track is solid. Listen to this album and go see the movie!

Buy Talking To My Diary [Explicit]

18. MAJICAL CLOUDZ- ARE YOU ALONE? 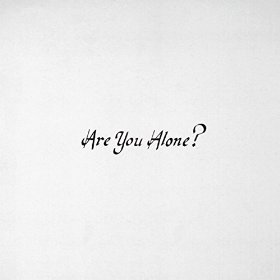 Sophomore album by duo made up of singer Devon Welsh and multi instrumentalist Matthew Otto is at the least the equalto the group’s excellent debut “Impersonator”. Like “Impersonator” there are two standout cuts- “Downtown” and “Silver Car Crash” but “Are You Alone?” may be even more consistently great than its predecessor. But other tracks like the title cut, “Control”, “So Blue” and “Change” are nearly as good making the album a meatier offering overall. Like Morrissey, Majical Cloudz can be sad to the point of parody. The electronic-based music is so spare and quiet- focusing the listener on Welsh’s hypnotic, haunting baritone vocals. If you find beauty in sadness Majical Cloudz is a must listen.

Buy Are You Alone? 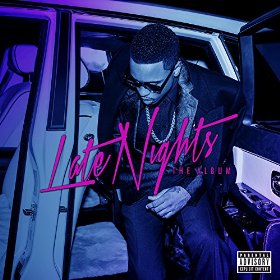 Jeremih is a crazy talented singer and multi instrumentalist whose sweet as honey falsetto voice has appeared on what seems like half of rap’s featuring credits of the last few years. “Late Night”: The Album” is his third studio album which dropped unexpectedly in mid-December and delivers on all of the promise of his guest appearances. “Late Night” is a true R&B/Rap hybrid album. Though Jeremih doesn’t rap himself, he brings in big hitters like Future, J. Cole, Migos, Big Sean, YG, Twista & Juicy J. to guest rap all over the the album. “Late Nights” varies from sweet to raunchy, sometimes within the same song. It’s first half is nearly perfect and though it lags somewhat over the second half there is still much to like here. There are more than a handful of outstanding tracks included the radio hit “Planez”, the upbeat club anthem “Don’t Tell ‘Em” featuring YG and two killer ballads “Impatient” and “Oui”. Jeremih really shows his range & depth as a singer and musician on the album’s last track “Paradise”, which is nothing more than him and an acoustic guitar, and it’s one of the albums best tracks. Though at times the raunchy lyrics seem misplaced and detract from the quality of the songs, “Late Nights” is a big winner overall and one of the year’s best R&B albums. 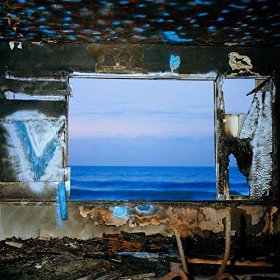 “Fading Frontier” is being called Deerhunter’s pop album, which is only a bit of an overstatement. Over the course of the last decade Deerhunter have rather quietly built one of the most impressive discographies in indie rock. They have been able to tread the line between accessibility while remaining outside of the margins. They have their own singular sound, but have been able to tweak it to give each release its own variety. Before Deerhunter have brought us several jams per album that stand out amongst the rest of their catalogue. “Fading Frontier” is their first that has an album full of them. In a cooler world you can imagine nearly half on the radio. Their jangle pop influence is now more front and center and their experimental side takes a backseat. They are still plenty psychedelic, but now within concise tight three to five minute songs rather than weird, meandering tracks. “Fading Frontier” was released in October, near the end of a pretty incredible year for music. I feel like it’s been a bit underappreciated. Here’s to hoping that 2016 brings this album more life and exposure.

Buy All the Same 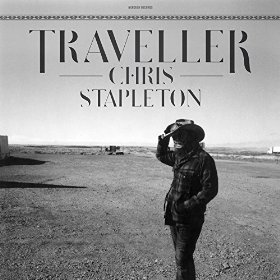 Chris Stapleton is a thirty seven year old Nashville lifer who seemingly came out of nowhere in 2015 to release his debut solo album and sweep the Country Music Awards to the result of some big hits and album sales. “Traveller” further points the way toward a welcome trend away from big hat over-produced cheeseball “bro-country” toward a more authentic traditional country sound. Likeminded artists include Jamey Johnson, Jason Isbell and Sturgill Simpson along with plenty of women including Ashley Monroe, Brandy Clark, Kasey Musgraves and even Miranda Lambert. Stapleton, like many in Nashville, has been plying his trade as a songwriter for other Nashville artists for well over a decade. But it’s difficult to see why he took so long to get noticed in his own right. His smooth baritone is bluesy and soulful and Stapleton is able to master ballads and rockers, traditional twang as well as more modern straight-forward songs. He threads the needle perfectly between accessibility and outlaw country and as a result is having a huge radio hit with his cover of “Tennessee Whiskey”, to my ears the best song on the album. But there is plenty to love on “Traveller” and my guess is that Chris Stapleton is a country star who is here to stay. 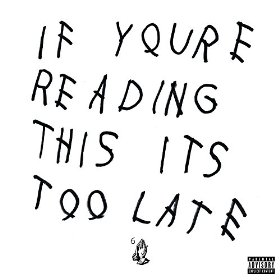 Already probably the biggest rap star on the planet, Drake dominated 2015 like never before.   He is set to drop his next official album “Views From the 6” early this month and its lead single “Hotline Bling” became his biggest single ever last October. He dominated 2015’s biggest rap battle between Meek Mill, also scoring another big hit with “Back To Back” and collaborated successfully with Future with late 2015 album “What A Time To Be Alive” which boasts hits like “Diamonds Dancing” and “Jumpman”. Back in February he released “If You’re Reading This, It’s Too Late”, planned as a free mixtape but instead released digital only and was one of only a handful of albums to sell a million units in 2015. Though the album is a bit overly long its highlights are many and it sounds better now than upon release. This is Drake at his most emo and experimental and least accessible. A rich man bitching about his problems, but it is always interesting to dig into his psyche. There are no obvious singles but some of the standouts on here like “Legends”, “Energy” and “Know Yourself” became hits despite their anti-commercialism. Drake’s audience buying into whatever he is doing shows that he is truly at the top of his game.

Buy If You’re Reading This It’s Too Late [Explicit] 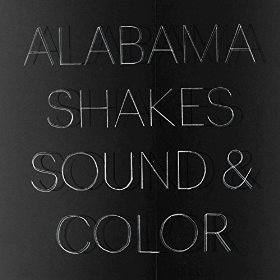 Since the band’s 2012 debut album Alabama Shakes have built a very solid roots rock following behind the powerhouse lead vocals of Brittney Howard. While the debut was solid, lead single “Hold On” stood apart from the rest of the album and the Shakes were known mostly for their live sound rather than their recordings. This is what makes their sophomore album “Sound & Color” such a pleasant surprise. The group stretches out and experiments, showing that they are more than just a sixties retro throwback. “Sound & Color” is both musically varied and sometimes downright weird, dabbling into modern indie rock sounds, as well as seventies glam rock, punk rock and especially psychedelic soul. “Sound & Color” beats their previous album in every way possible- it is more interesting as well as more consistently good, even if it doesn’t contain an anthem on part with “Hold On”.

Buy Gimme All Your Love 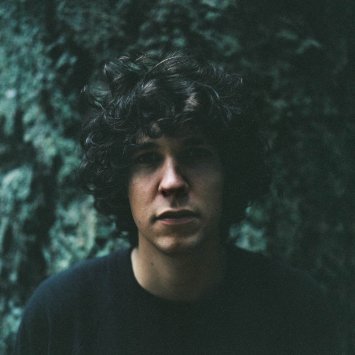 Like Father John Misty and Natalie Prass, Tobias Jesso, Jr. helped to lead a throwback to the 1970’s Laurel Canyon singer songwriter scene at the beginning of 2015. Jesso Jr. is a 29 year old, who had become an indie-blog favorite the previous year. By the end of 2015 he was writing songs with Adele on the top selling album of all time. What a difference a year makes. “Goon” is emotional, simple & spare with a great sense of melody with the main focus on Jesso’s piano and voice. The highlights are many including the great “How Could You Babe”, “Hollywood”, “Without You” and “For You” but the album is solid from top to bottom. There is nothing like Jesso currently on the radio but his music is plenty accessible for potential crossover and hopefully his star will continue to rise in the near future. He is totally sincere where artists like Father John Misty are dropping with irony and cynicism.

Buy How Could You Babe 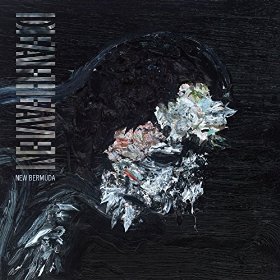 OK I know these guys aren’t for everyone but “New Bermuda”, Deafheaven’s sophomore album, is actually a real improvement on the group’s much discussed, instant metal classic debut. Deafheaven combines black metal with shoegaze and atmospheric electric guitar music akin in Explosions In The Sky (see: soundtrack of Friday Night Lights), which can alternately be a pummeling assault on the senses while also unfolding into moments of deep beauty. The band is made up of expert musicians who can change tempos and stop on a dime with an incredible drummer seemingly well versed in many different musical styles. The demonic vocals sound like Satan himself and are unintelligible both with and without a lyrics sheet (but the lyrics are great and should be checked out!). The vocals are not everyone’s cup of tea and are best enjoyed as another musical instrument rather than pure singing. Somehow the singer was able to pull these vocals off live- I’m still not sure how!! “New Bermuda” is five tracks long- all over 7 minutes and all great. It’s a perfect album for what it is. Just don’t expect it to soundtrack your next party, unless it’s a Bar-b-q in hell.

Buy Brought to the Water